The cell cycle or cell-division cycle is the series of events that take place in a cell leading to its division and duplication of its DNA (DNA replication) to produce two daughter cells. It makes Cell growth. (http://en.wikipedia.org/wiki/Cell_cycle) 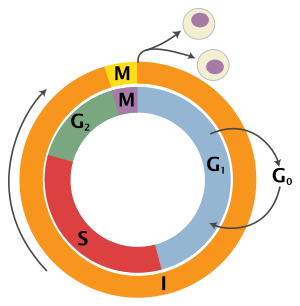 Each stage requires completion of the previous step, as well as activation of necessary factors; nonfidelity of DNA replication, or cofactor deficiency result in arrest at the various transition points.

The cell cyle is regulated by activators and inhibitors.

Cell cycle progression is driven by proteins called Cyclins - named for the cyclic nature of their production and degradation - and cyclin-associated enzymes called Cyclin-dependent kinases (CDKs).

Transiently increased synthesis of a particular cyclin leads to increased kinase activity of the appropriate CDK binding partner; as the CDK completes its round of phosphorylation, the associated cyclin is degraded and the CDK activity abates.

Thus, as cyclin levels rise and fall, the activity of associated CDKs likewise wax and wane.

More than 15 cyclins have been identified; cyclins D, E, A, and B appear sequentially during the cell cycle and bind to one or more CDKs.